The Regional District of Nanaimo staff are recommending the RDN Board approve a budget increase to the Huxley Park redevelopment project.

The proposal to increase the budget by $262,900 to $1,036,600 was brought forward by staff at the Feb. 8 board meeting; however, Electoral Area B Director Vanessa Craig moved for it to be deferred to the next board meeting on Feb. 22.

“I want to get more information before I fully support it,” Craig said at the Feb. 8 meeting.

She told the Sounder in a followup, “I am in favour of the general idea of completing the Huxley Park design and particularly adding landscape features, I’ll be looking for more information about the updated design ideas for the elements and meeting staff on site to review the information.”

Staff note in the report that adding these items to the project scope, “including those originally removed at the time of tender, will require an increase to the project budget. Increasing the project budget to include the recommended items will result in a park improvement that better aligns with the initial design intent and community expectations. Making the change at this time will take advantage of the fact that the contractor is already mobilized and working on site.”

Items included in the budget such as replacing the Sport Court bleachers increase were ones identified earlier in the Huxley redevelopment as ‘Phase 3’. The addition of the playground and upgrades to the Sport Court were Phase 1; the Skatepark addition and Parking Lot replacement were Phase 2.

The Skatepart portion of the Huxley project initially included a number of items that were removed via post-tender negotiations with the only bidder on the project, Radius Contracting, whose bid came in at $941,610.  The revised project scope brought it into the original budget of $773,700 and included a contingency of $98,865, with the option to apply any unused contingency to items removed from the project.

That contingency fund is already spoken for and will cover rock breaking and removal, the skatepark entrance and “viewing area improvements,” coloured concrete, landscape restoration, a new park sign, a memorial feature and “miscellaneous changes,” according to the Feb. 8 RDN staff report.

The $262,900 proposal, which includes a 10 per cent contingency, suggests taking the monies from Area B’s Community Works Fund, funding the regional district receives via the federal Gas Tax Agreement.

So far the project has been funded by a combination of $567,354 from the federal and provincial governments through the Investing in Canada Infrastructure Plan Community Culture and Recreation Infrastructure Stream, $206,346 from Area B community parks reserves and operating funds and $68,000 in community donations.

Construction of the skatepark project was intended to be completed in January; however, delays due to adverse weather have set the planned completion date back to April, according to the RDN staff report. The proejct start date was also delayed by a month due to high fire risk last summer.

Huxley Park isn’t the only RDN park project facing increased costs. The board of directors passed a motion to increase the budget for improvements to Anders and Dorrit’s Park in Electoral Area C (Extension, Nanaimo Lakes, East Wellington, Pleasant Valley) by $50,000 to $337,000. 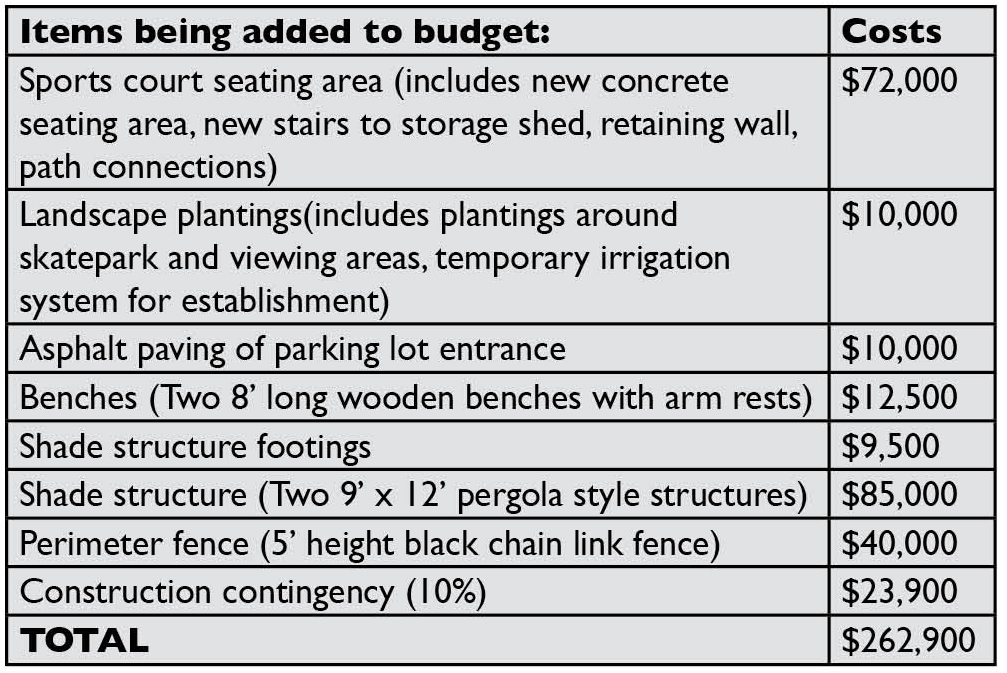