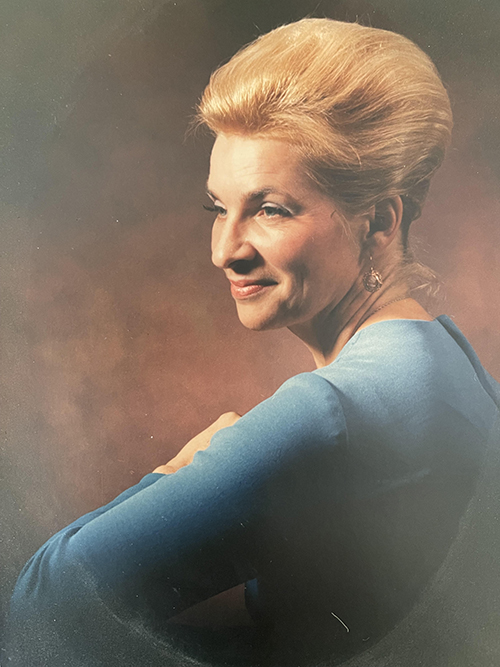 Dolores “Dee” Lauder moved over to another dimension on March 17, 2022, at the Wascana Rehabilitation Centre in Regina, SK, celebrating with family and friends and lovingly assisted by MAID. Dee was a long proponent of dying with dignity, and was pleased to qualify for this remarkable program.  Dee was 90 years old, born on February 29, 1932, in the middle of a Saskatchewan blizzard in her maternal grandparents farm house near Aylsham.

Dee lived a life as diverse and interesting as her birth.  The eldest daughter of a rural school teacher, John Robert Denike and her mother Delchen (Del) Gentner, she treasured her memories of Blinkie, the family cow who lived in the barn at the teacherage of Florentine School. Blinkie’s milk, mostly accurately directed by father, was sprayed into kids and cats waiting open mouths. What fun!

In 1970, after the death of Charles, Dee moved the family back to Saskatoon to be closer to family. Life there as a single mother and electrologist was changed when she met the love of her life, Bob. John Robert Lauder (1937-2019), farmer, artist, sailor whom she met in 1975. She started the Valley Sod Farm with him in 1976, and married him in 1978. After Bob built a 44 foot steel hulled sailboat, they moved to Gabriola Island, BC, in 1990. Island living brought out the artist in them both and FOGO Folk Art evolved much to the pleasure of island folks.  The local bus system, ‘Gertie” is named after the 10-foot-tall carved, wooden public art figure, Gabriola Gertie, created by Bob and Dee and placed at the local ferry terminal.

Increasing age and need for nearer health services precipitated their move to Nanaimo in 2012.

Again, declining health saw them move to the Bentley in Regina in 2018. Bob died in 2019. Dee continued to live at the Bentley and then at the Williston until her death.