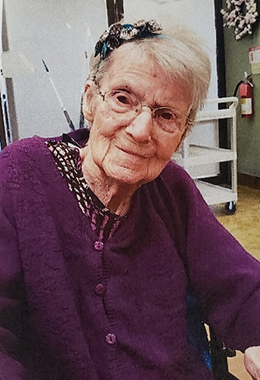 Helen died peacefully at her residence in Nanaimo, B.C. in the early hours of Thursday, June 17, 2021 with her daughter Mary by her side.

She was born in Sandy Beach, Quebec, the fifth of ten children, where her father ran a general store. Her Mom died when Helen was just seven, leaving the eight surviving children in the care of father, grandfather and auntie.

Near the beginning of the second world war, the Gaspe Peninsula faced a teacher shortage. Helen completed Grade 10 by correspondence and began teaching in her late teens, working in several small communities on the coast.  She travelled home to Sandy Beach whenever she could, and it was on one of those trips that she met Walter Wilson, a Navy shipwright. They met at a dance put on by the Y in Gaspe for the troops. She tripped over his feet while walking towards someone else – he always said it was an accident. They were married in June of 1945.

Once war ended, Helen and Walter moved to the farm at Fleming, Saskatchewan, where he had grown up. They raised three children (Barry and Ellary, now deceased, and Mary) and enjoyed welcoming family and friends as they drove west or east across Canada. They farmed until Walter was in his eighties, and Helen continued to live there until Walter’s death in 2000. She then moved, with her son and grandson, to the west coast to live with Mary and her husband Robbie Huston in New Westminster. When we moved back to Gabriola in 2005, she and Ellary came with us.

Helen’s life contained considerable tragedy. The brother next in age to her died the year after her mother did, and her eldest brother Will was killed in Germany in WWII. She lost a child at birth, and both her sons died before she did. Throughout her long life, her faith was vitally important to her. She was an attentive member of St. Martin’s Anglican Church, applauding when the church became Christ Church Gabriola in collaboration with the United Church congregation.

She enjoyed welcoming friends to our home, presiding over a Wednesday afternoon tea that ran almost every week for nine years. She was a great communicator. At one time, she had a list of 19 friends and family she called across Canada, ranging from her sisters to the woman she shared a desk with when she started school in Sandy Beach. She loved her connection to Robbie’s family, attending weddings and welcoming new babies with gentle enthusiasm. She and Barbara Huston, Robbie’s mother, had always been friends, but they became closer in the four years Barbara lived with us.

In later years her health declined. With the wonderful support we received from the Gabriola Homecare staff, and with the support of Dr. Tracey Thorne, Helen lived with us until fall of 2019. Then she moved to Dufferin Place in Nanaimo, where she received loving and gentle care.

She is survived by her daughter Mary Wilson and son-in-law Robbie Huston, Robbie’s family, her daughter-in-law Faith Swanson, her sister Mabel Adams, brother Ted Harbour and sister-in-law Marie, her grandchildren, greatgrandchildren, and many nieces and nephews, and friends.

We will welcome friends to an informal tea in celebration of her life on Sunday, July 11, from 2-4 p.m., at Robbie and Mary’s home. Please call (247-0242) or email (mary.gabriola@gmail.com) if you need directions.