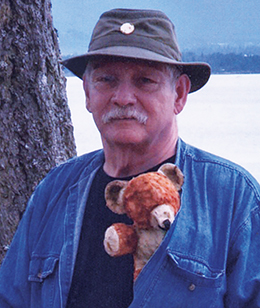 Shown here with his sister-in-law’s childhood teddy that she always traveled with and brought to Gabriola on a visit in 2018 is Ed Gisler, who died suddenly early on Dec. 17 at the Nanaimo Hospital of a combination of pneumonia and an intestinal infection that led to sepsis and multiple organ failure. His wife Kat was called to his bedside on Wed. Dec 16. He was able to sing his favourite song to her “You are my Sunshine,” exchange an I love you, and see and say “Hi” to each of his four children one last time on a coordinated FaceTime call. He died later that night, given Comfort Care as he wished.

Ed was born on March 16, 1950 in Winnipeg, Manitoba to Peter and Leona (Castonguay) Gisler. He was the third of four children. He lived in Balmertown, Red Lake Ontario for his childhood, where his father was a Diamond Drilling contractor for the gold mines up there. Ed and his brother spent many hours disappearing into the bush after breakfast and not showing up again until dinner, getting into all sorts of adventures like taking dinner knives to the town dump to watch the bears, just in case one charged (!), playing on the incredibly toxic slimes – chemicals that were left over from drilling for the gold – selling shiners to the tourists who flew in for fishing trips, as well as the muffins that their mother had left cooling on the back porch!

Being a big kid, he also stood up for the underdogs and made sure bullies knew they would have to answer to him.

Ed’s parents go divorced when Ed was twelve and his mother moved with him and his brother and one sister to Duluth, Minnesota. His older sister stayed in Balmertown. Ed’s mother worked many jobs to support them, and no matter how tired she was at the end of the day, would take them swimming. Or to a park in the winter where they would clear the snow off a picnic table and have dinner.

He went to high school in Duluth and worked at a local packaging company, contributing to the family income.

Ed didn’t finish high school in Duluth as at the age of 18 he followed his older brother into the U.S. Army, (still keeping his Canadian citizenship). His commanding officer realized Ed would have a hard time ordering men into battle instead of taking care of them, so Ed was sent to For Sam Houston in Texas to train as a Combat Medic.

When asked if he wanted to be deployed to Germany or Vietnam, he thought Germany sounded boring, and had never heard of Vietnam, so he chose Vietnam. He ended up service in Vietnam as a Combat Medic from 1968 to 1970. He was honourably discharged after being wounded by a nearby land mine.

After the army, Ed passed the GED test in the U.S., and obtained his high school diploma, met and married his first wife, and worked as a physician’s assistant in Southern Minnesota, and had two children, Jennifer (Jenny) and Michael. He then lived full time in St. Cloud, Minnesota where he joined the local Women’s Shelter board and formed a group to help abusive men change their behaviour.

This was later absorbed into the St. Cloud Intervention Project (SCIP), which he helped create and co-led for six years. At the same time, he attended St. Cloud University and received his Bachelor’s Degree.

He and his wife divorced, and in 1982 he met “the love of his live” Kat MacVeagh, who had just moved with her two children, Ellie and Ben, from Northern Minnesota to St. Cloud to work as a School Psychologist.

Ed and Kat got married in 1985. After the ceremony and reception, they drove through the city in Ed’s repainted blue Bell Telephone van, with cans tied to the back and all the kids cheering out the windows.

After leaving the SCIP project Ed then started a similar project in Little Falls, Mn. Following that, he worked as a counsellor for the Mille Lacs Academy from 1991-1996, dealing with Juvenile Sex Offenders. Again, he made an impact on some of these boys’ lives. He had always wanted to get his Master’s degree. He was accepted at and received his Master’s in Clinical Social Work from the College of St. Catherine/St. Thomas in St. Paul, Mn. He continued to enjoy working with clients who presented with challenging problems.

Ed was always the adventurer. After Vietnam, he roamed the U.S. with cameras, hitch hiking or driving. He was a talented photographer. He walked the West Coast Trail on Vancouver Island three times.

When he and Kat met, he brought her and their four kids out to Vancouver Island – where his dad lived in Cedar –  in the blue van, refurbished to sleep all of them. He introduced them to Long Beach and the Greenpoint Campground, where he and Kat still visited once a year until Covid prevented it. In 1986 they bought their cabin on Gabriola, back when beachfront was affordable. They drove out every summer until 2000 when they retired here, and had their lovely house built but Ian Johnson, owner of Kiwican Construction.

Until an accident in 2010 chopping wood injured his back, Ed was known to chop the summer firewood for Jim Demler at the Descanso Bay Campground, volunteer with Kat for Meals on Wheels, pick up day old bread from the old bakery at Twin Beaches and deliver it to the food bank, and volunteer with a few families to do therapy with their kids, while Kat worked with the parents.

Ed was a regular at GIRO, and was known for his fantastic yard sales. He was a collector of all things great and small, odd or beautiful and had an eye for the unusual.

He is remembered by many on the island as the guy who gave them or their kids the perfect small rock for a special occasion or for no reason at all, or started them collecting stamps, which was another of his passions. Before Peripheral Neuropathy from Diabetes affected his hands, he carved walking sticks and painted watercolours.

Ed always seemed to be able to bounce back from whatever illness or injury happened to him. so it was a shock to his family and friends that he wasn’t able to come back from this last one.

He is survived by his wife, Kat, daughters Jenny and Ellie, sons, Michael and Ben, brother Les, sisters Georgina and Pam, six grandchildren and one great grandson. Except for Georgina who still lives in Balmerton, they all live in the States so until they can gather on the deck overlooking the water, Ed’s Celebration of Life will have to wait. Those who knew him have their own memories.

Thank you to all who have reached out with calls, cards, flowers or cookies!

What an amazing community we live in. Anyone wishing to donate in Ed’s name, can do so at woundedwarriors.ca