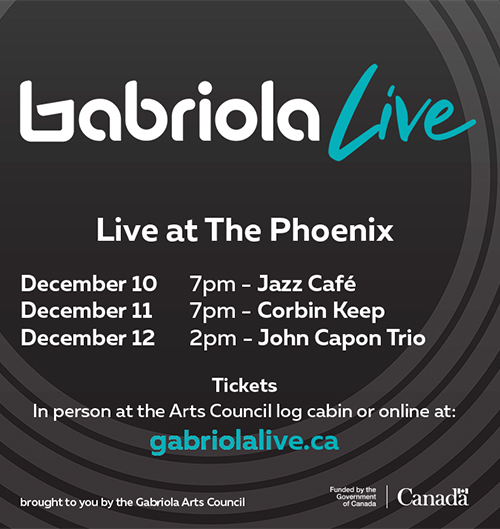 Gabriola Live has 6 upcoming concerts at the Phoenix Auditorium in December. Get your tickets now at gabriolalive.ca or visit the Gabriola Arts Council Jack Pine log cabin Monday – Friday from 10-4pm. Live performance is back and people are having fantastic nights out. Each venue has reduced seating, masks and vaccine passports are required. COVID protocols are in place. We are coming up to a couple of triple threat weekends Dec 10-12th and Dec 17-19th. Here is a little more information on the upcoming shows.

Roger Christie warmly entertains you with his amusing, exciting and/or moving life transformations held within stories and songs. Roger will be happily joined by Jen Hiltz, a talented treat as a vocalist, the remarkable and eclectic Marty Steele as arranger/ keyboard player, and Gabriola’s superbly fine sax player, Brian McMahon.

Known as the “Wild Cellist,” Corbin is an incredible cellist and performer that freely plays with style and sound! His concerts are equal parts moving, hilarious, and rife with fun, cellocentric surprises.

Admired by cellists and music enthusiasts far and wide, Corbin is a much anticipated performer of Gabriola Live.

The John Capon Trio (consisting of John Capon on trombone and vocals, Brad Shipley on guitar and vocals, and Brian McMahon on upright bass and vocals) are delighted to have violinist Patricia Armstrong join them for a special evening of swing, jazz and classical music. The group will perform a wonderful variety that features Patricia performing solos in the style of the late and great Stephane Grappelli.

Franco-Ontarian fiddler Pierre Schryer and west coast singer and guitarist Andy Hillhouse are a tour de force of fine musicianship, versatility, and technical dexterity. The duo brings together two diverse musical careers and delivers an eclectic & authentic blend of Folk, Celtic & World music. Dagger Harbour will open the show. Dagger Harbour has a harp (Mars Kurek), and a banjo (Emily Carson-Apstein), and the harmonies you need.

Paul Gellman with Brad Shipley, Brian McMahon, and Phil Frisson featuring Jake Galbraith, Sandy Lucken, and NEAVV in a night of mostly Canadian music. This evening showcases great Canadian music with some of the finest Gabriola musicians! Original compositions from Paul and NEAVV will be featured as well as Canadian songs from the likes of Leonard Cohen, Neil Young, Bruce Cockburn, Joni Mitchell, Stan Rogers, and more!

Join three local singer-songwriters – Carolyn Bell, NEAVV, & Sarah Osborne – for an engaging afternoon of songs and stories in the round. Carolyn Bell is a multi-faceted artist whose love of music, visual arts and writing have always sustained her. Sarah Osborne is a singer-songwriter from the west coast of Canada, from a musical family and background in marine biology. NEAVV is an alternative synth pop artist, songwriter and producer, who also just happens to have a Masters in Opera Performance.

For more information about the shows, the schedule for upcoming shows and to purchase tickets, visit gabriolalive.ca, it is updated regularly and you can also see listings in the Events Calendar in this Sounder. Dave Teichroeb, Project Manager, Ron Cote, Tech Manager, and Samantha Walker, Assistant Project Manager, have even more shows for you leading up to March 31, 2022. Gabriola Live is a presentation of the Gabriola Arts Council made possible by a generous grant from the Department of Canadian Heritage. The series is also a fundraiser for the Gabriola Arts Council in support of operations and bringing Gabriola quality programming and events while supporting all artists on the island.

Together we cultivate the arts. 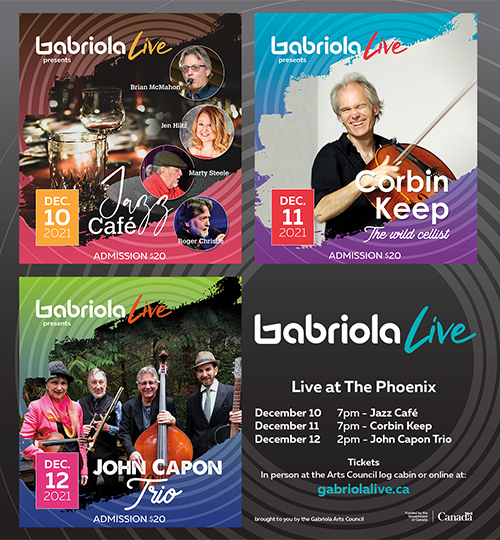 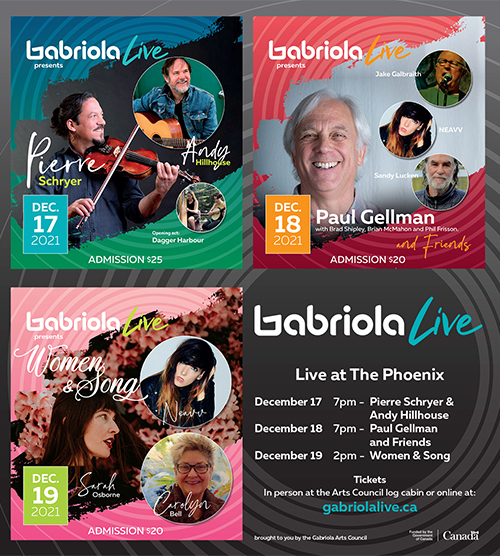