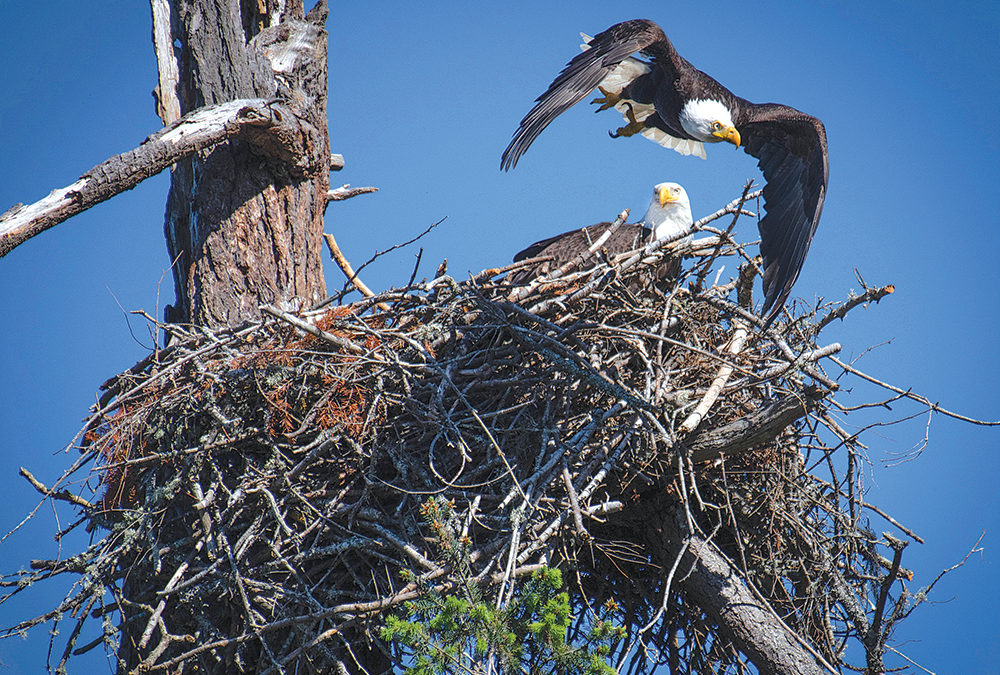 A long-time Gabriola couple will soon be appearing in their own reality show. Watch them repair and renovate their home. See them gathering wood and spending long hours looking after the kids.

On the surface, they could be just about any island couple. But they don’t live on the surface. Their home is a nest twenty-five metres up a fir tree, exposed to the wind and the rain.

Like most of the island’s eagles, the two are currently pursuing other interests – and spawning salmon – in the rivers of mainland BC. When they return to Gabriola Island in the coming weeks, they’ll be watched by a high-definition camera mounted in a nearby tree. Every moment of their lives will be streamed on the website of GROWLS, the Gabriola Rescue of Wildlife Society.

Establishing an eagle-cam on the island has been a long-term goal of GROWLS’ group of eagle-nest monitors. They secured grants from GROWLS and the Gabriola Recreation Society and purchased a camera from Securico. But it had to be installed during the late-summer window when the eagles are away from the island on their annual migration that follows the salmon. No suitable nest could be found until a former bird biologist came to the island to sit out the Covid pandemic. He found himself living under an eagle nest and, also being an experienced climber, approached GROWLS with the same idea of installing a viewing camera.

Last week, he put on his harness, untangled his ropes, and climbed 27 metres up a fir tree to strap the camera into place.

To protect the privacy of both property owners and the eagles, the location of the tree will not be disclosed. But viewing of the nest will be freely available on the GROWLS website at www.growls.ca

If the history of the nest is anything to go by, the first season of this new reality show should be an exciting one. A year ago, the nest collapsed in a windstorm, leaving a stranded chick standing forlornly on a branch. In a previous summer, a chick was electrocuted when it hit nearby power lines on one of its first flights from the nest.

For now, there’s not much to see. Weather changes have affected the schedules of all wild animals, but the eagles can be expected to return to the nest in early October and spend the next month repairing their nest. They should mate in February, lay eggs in March, and hatch one or two chicks in May. If all goes well, the chicks should make their first flight in July.

The eagle monitors hope the camera will help raise awareness of the need to protect the larger, older Douglas Fir trees amid development and climate change. For more information about the program, contact Darlene Mace by email at Dar.mace@gmail.com