A much-anticipated evacuation route guide for Gabriola, and all of Electoral Area B, has been released.

Produced by Calian Group Ltd on contract with the Regional District of Nanaimo, it will guide the regional district’s emergency operations centre in the event of an evacuation needed on Gabriola, Mudge or DeCourcy islands. The full guide details evacuation routes, vehicle staging locations, estimated evacuation times and “other tactical considerations” that may be needed during an event such as a fire, windstorm, drought or power outage.

It also breaks areas of the islands into evacuation zones – 11 on Gabriola and one each on Mudge and DeCourcy. The estimated timeframe for evacuating a zone was determined by dividing population – this version of the guide uses 2016 Census data – and vehicle occupancy, divided by an estimate of roadway capacity. At 771 hectares and an estimated 339 vehicles during an evacuation, the Horseshoe Road area, marked as zone 7, is estimated to take 24 minutes to evacuate all residents.

“It seems a little bit optimistic – you need to do that, I guess,” Area B Director Vanessa Craig commented at the Feb. 3 electoral area services committee meeting.

Directors also commented that the main focus of the guide appeared to be on evacuation via BC Ferries and wondered what considerations had been made if that was not possible, such as if the terminal infrastructure was damaged.

Vanessa Howard of Calian Group said it was discussed during consultations, but it can be “difficult to plan for every contingency,” adding the guide details who emergency operations centre staff would need to coordinate with, such as the Coast Guard and search and rescue stations, and lists muster points, marine accesses and helicopter landing sites around the islands. The guide was developed using an “ all-hazard planning process so that the planning document can be applied to all hazards broadly,” Howard said. The “granular is outside of the scope” of the guide.

In the event that the entire island population needed to be evacuated, it is estimated it would take 14 hours via the new ferries, Catherine Morrison, RDN manager of emergency services, told the committee.

Craig raised concerns about some neighbourhoods with only one road in and out, such as the Whalebone area. Morrison said the RDN was aware of the special circumstances and noted the value of neighbourhood emergency preparedness plans. Upon direction of the board, staff could draw up more specific response plans for those neighbourhoods. 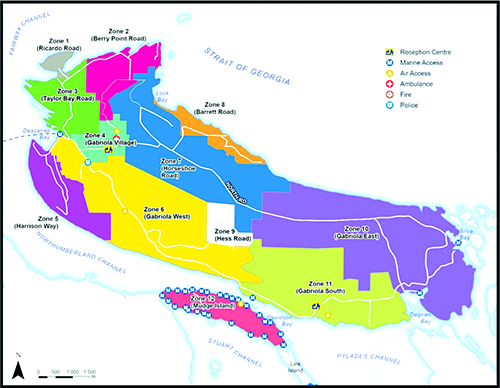