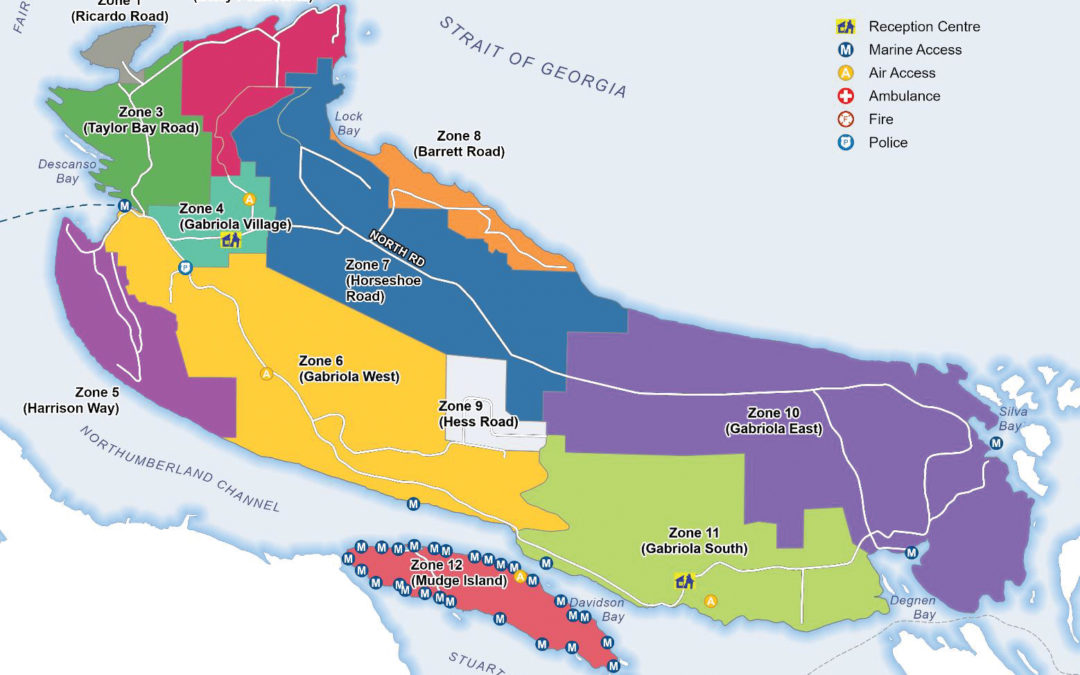 The Gabriola Volunteer Fire Department is planning an Evacuation Scenario this coming August, and is seeking community members in the Strand and Whalebone areas to take part.

Kitt Stringer, Training Officer for the GVFD is planning the scenario for Sunday August 14, at 1pm.

He has reached out to all emergency service agencies in the area to participate in a real-time simulated disaster evacuation.

Volunteers from the neighbourhood are being sought, to act as persons who would leave their residences and be physically evacuated for the duration of the scenario.

He explained in an email to stakeholders that the goal of this scenario is to assist with the local evacuation of Gabriola Zone 8 – Barrett Road.

The neighbourhood is bordered on the North side by the ocean and to the South by parkland and undeveloped forest area.

The southwest side of the neighborhood is an intermix zone, with the rest of the area being an interface.  There are pre-determined muster points established in the RDN Evacuation Route Guide.

Stringer says, “our scenario will involve a simulated Wildfire that is threatening the neighborhood and which necessitates a local evacuation of Zone 8.”

Those wishing to volunteer from Zone 8 to participate as evacuees for the exercise are encouraged to contact the GVFD at the non-emergency number of 250-247-9677, or email Stringer at gabriolafiretraining@gmail.com

This past February, the Regional District of Nanaimo released an evacuation route guide for Gabriola, and all of Electoral Area B.

Produced by Calian Group Ltd on contract with the Regional District of Nanaimo, the Guide was intended to guide the RDN’s emergency operations centre in the event of an evacuation needed on Gabriola, Mudge or DeCourcy islands.

The full guide details evacuation routes, vehicle staging locations, estimated evacuation times and “other tactical considerations” that may be needed during an event such as a fire, windstorm, drought or power outage.

It also breaks areas of the islands into evacuation zones – 11 on Gabriola and one each on Mudge and DeCourcy.

The estimated timeframe for evacuating a zone was determined by dividing population – this version of the guide uses 2016 Census data – and vehicle occupancy, divided by an estimate of roadway capacity.

The guide states that the zone is stretched along a roadway 1.4km in length, with an estimated population (2016 census) of 481 persons, with 281.5 vehicles. The guide estimates it would take 18 minutes to evacuate all residents from Zone 8.

Given that the Strand and Whalebone only have the one road – Barrett – to get to the ferry, critics have said there needs to be consideration of evacuating people using other methods, such as marine rescue from any number of boat launches and beach accesses between Sandwell and Joyce Lockwood.