In memory of Gabriola’s Stephen Smith, Ride Free donated $8,000 for the Huxley Skatepark 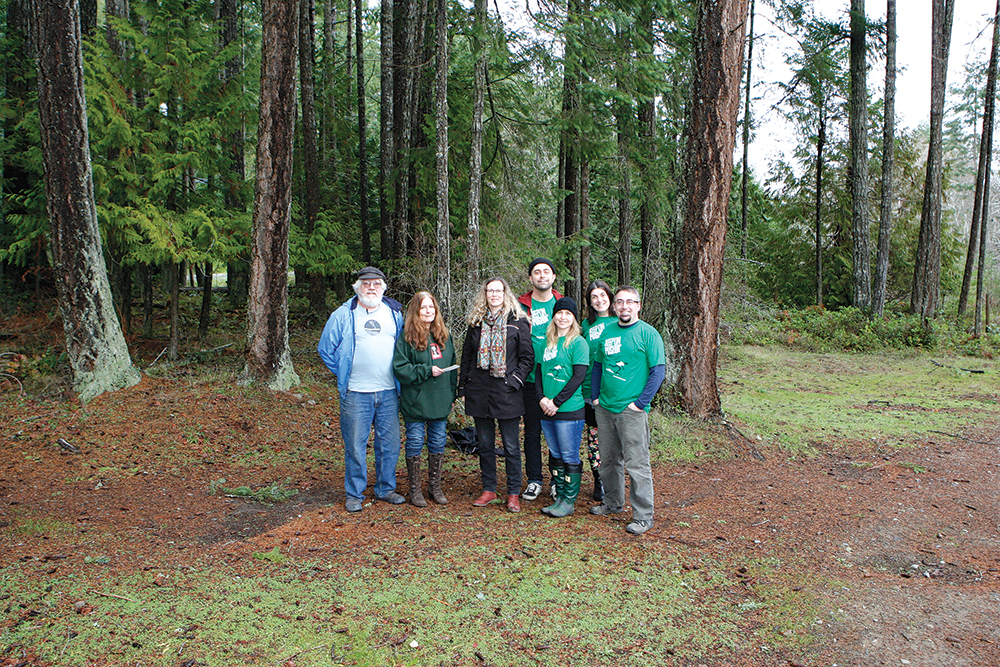 2018 photo, taken on the site of where the Huxley Skatepark has now been built.
(L-R) Grey Switzer and Gaye Maulson-Smith, wearing their Ride Free shirts, presented Area B Director Vanessa Craig of the Regional District of Nanaimo with a cheque for $8,000 to be put towards the building of the skatepark at Huxley Community Park. Present were Jenny Ivany, Tim Gambrill, Julie Sperber and Derek Kilbourn with the Gabriola Skatepark Fundraising Association.

The Ride Free Community Association has given $8,000 to the Regional District of Nanaimo to be used to build a skatepark at Huxley Community Park.

The monies come from an account held in trust by the Association for almost 15 years – to see a skatepark built in memory of Stephen Smith.

His mother Gaye Smith, and Ride Free member Gray Switzer, presented the monies to RDN Director Vanessa Craig on December 19, 2018. Members of the Gabriola Skatepark Fundraising Association were on hand to thank Gaye and Switzer.

Gaye said she would really “like to thank the community for all the support given to Ride Free and our family. There’s a lot of people that put a lot of years and time into this. I’m really happy to be able to hand it over and have some part in making this [skatepark] happen.”

Prior to his death, Stephen had been working with other youth on Gabriola to fundraise to build a proper skatepark on Gabriola, holding some of the meetings at the Smith home.

Gaye said that after Stephen died “we felt the usual things that people did weren’t fitting because of his age, and because he was young and healthy – it seemed like it should be something that represented him.”

Smith’s organs were donated, and the group which would become Ride Free was started.

“We thought that [a skatepark] was something he wanted badly, we wanted to make that happen for his friends and as a memorial for him.”

The name Ride Free came from a card one of Stephen’s friends had hanging from the rear view mirror in his vehicle.

It said, “Ride Free Brother” and had a skateboard under the wording.

The group started fundraising, and in the early years there were many events, including concerts and hot dog sales.

Gaye said there were two reasons for doing all the events and fundraising.

One was to raise the monies necessary to build a skatepark.

Then there was the second reason. “In the beginning we were looking for a way for the young people affected [by Stephen’s death] to put their energy.

“I was too grief stricken to be angry. His peers were angry with what had happened to their friend. I didn’t want anything else to happen – this was a way to put their energy into something positive after something tragic.

“So a lot of our events were a coming together of people that loved him – parents and businesses, and a lot of people supported us.”

She said after a few years though, it got harder, “when we realized as much as we kept trying for another site, the insurance was something we didn’t realize.

“Once we realized the site had to have insurance, that became more difficult. That was one problem.”

She said the other issue was that the island had other important needs during those years that needed to be met. Whether it was the fundraising and building of the Health Care Clinic or the emergency dock, there were things people were pitching towards because the whole island needed them.

Then the other board members started to move off island.

Gaye said, “We became stagnant, but held onto the money in the hopes that something would change.”

The big change came when the RDN took over at Huxley Park, and the Management Plan included plans for a skatepark.

She said when she heard the RDN intended to build a skatepark there, it went back to being something that could be a reality.

“When you start doing this for such a long time, you start to doubt it will happen.

“We thought we could raise the whole amount, thought we’d have a sign somewhere: Stephen Smith Memorial Skatepark.

“When we hit the roadblocks, we felt defeated. When Huxley became available, it was seen as something that can happen.”

“Aside from the natural beauty of the island, all the things to do outside, there’s an age group where kids don’t want to hang out with their parents anymore.

“Their friends become very important. They need a place to congregate and do something that’s an activity. I think it will be good for them.

“I think even people that moved off the island that knew Stephen, when they come back to visit family or friends, it will be nice to know they can go there and know they had a part in making that happen.

“It gives me a really warm feeling to know it’s going to happen.”

Gaye said she had a brief talk with Director Craig on the day of the cheque presentation, and feels like Craig is supportive of the idea of a memorial for Stephen to be at the park.

Gaye said, “I know it has to still get run through the RDN to make it happen.”

She said she doesn’t expect the park to be named after Stephen.

“Even if we can have a plaque or something – so that the people that started this and fundraised from the same reasoning as the same heart as us would have a place to go and remember him.

“Hopefully we can make that happen.”

As to how it felt, to hand over the monies after keeping it in trust for so many years in memory of her son, Gaye said, “It’s good. The day of, it was bittersweet. It brought back hard memories for me.

“Once I got over that, I’m really happy to be able to hand it over and have some part in making this happen.”

With the donation of the monies to the RDN, Ride Free has dissolved as an association. 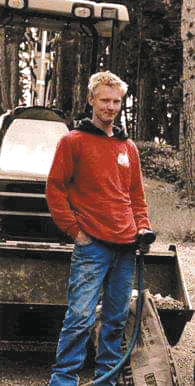 Stephen Smith, at a job site on Breakwater Island, one of the most recent photos taken of him, before his death in 2003 in Nanaimo. Photo courtesy Ride Free.