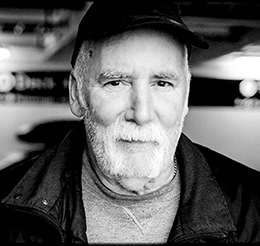 Kelly Burton was born in Vancouver, BC, and raised in and around BC’s Lower Mainland where he met and married the love of his life, Gayle. Together, they had their first home, a float house, by the Walden Bros. Sawmill at West Cracroft Island, the hub of Kelly’s logging career. After, Kelly and Gayle purchased a home in Burnaby, BC, where three children were born and raised. A proud father, Kelly then earned his Red Seal as a Heavy Duty Mechanic, and worked in the trade for his entire working life. He also built homes, fixed cars, rode his motorcycles, and cut numerous acres of lawn with a push-mower. Kelly is survived by his wife, Gayle, their three children, Kelly-Lyn, Klinton, and Rhondalyn (Jean-Philippe), his sister Gale (Lorne), his cousin Don (Susie), and a very special family dog, Emma.

Kelly moved from Abbotsford, BC, to Gabriola in September 2020, and passed away here peacefully on January 31, 2021, in Rhondalyn and Jean-Philippe’s home with his wife and children bedside.

“Keep a little fire burning; however small, however hidden.”