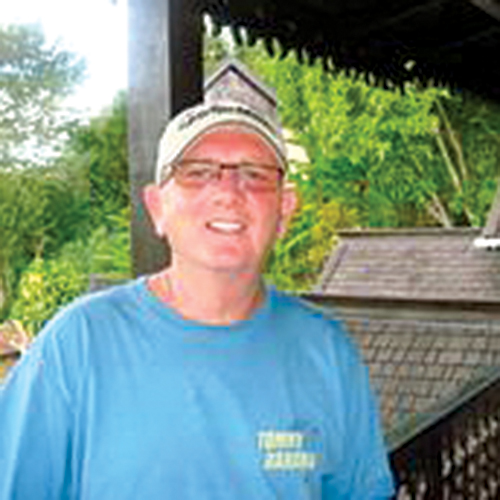 Michael F. Garrett, 68, passed away on February 4, 2022, leaving his loved ones devastated. He received the shocking diagnosis of prostate cancer in 2020, celebrated remission months later, and then received crushing news this past summer that treatment had stopped working and the cancer had spread. Michael fought bravely until the end but he just didn’t want anyone to know he was ill.

Mike would have hated a lengthy diatribe filled with monotonous achievements and accolades. So, a brief glimpse into Mike’s life, the way he’d like it to be remembered:

Mike and grandma Olive (aka Mum) moved from North Van to Gabriola when he was 15 years old. In the early days, he hated it and called it the Stone Age. He missed his friends, familiar surroundings, and the modern conveniences of the big city like cable TV, bus service, and the White Spot. Being an avid football fan, Mike learned the art of adjusting the TV’s rabbit ears to watch NFL on the only snowy channel that could be tuned in on Gabriola. Lacking entertainment, he created his own fun, when he and a couple of like-minded friends set a large bag of frogs free in the produce department at the old B&K Store.

Eventually, Mike settled into school in Nanaimo, made new friends, and played competitive sports. He was an excellent athlete playing football, baseball, tennis, and golf to name a few. He loved music, attended many concerts and really could dance.

After graduating, he embraced his life on Gabriola; landed a job with BC Ferries, and attended Marine College. He met Della and together they had two children, Melanie, affectionately known as “the President” and the ever so spirited Brandon.

In his spare time, Mike played and umpired softball, coached little league, and volunteered with the Gabriola Fire Department. He also joined the Gabriola Golf Club and spent many a day picking rocks on what would eventually become fairways. The first tee box was where he eventually met his wife, Miranda. Over the years they golfed, cooked, gardened, and travelled together. They loved just being at home with their dogs, Rosie and Sam (who will miss their daddy immensely), and making it cozy and comfortable. Side-by-side they tamed blackberries and thistles and built many gardens. She learned to like football and he learned to like fish.

After 38 years of working on the Gabriola ferry run, (working his way up to first officer) Mike retired.

A lesser-known side of Mike was his keen interest in the latest fashions and nice watches. He would peruse men’s magazines; he didn’t find anyone else following his lead and wearing socks with sandals, yet, he was patient. He knew it would eventually catch on.

Mike loved all animals; he’d feed his special deer their daily apple treats, lovingly cut into bite-size morsels. But he especially loved elephants. So please adopt an animal through the World Wild Life Fund Canada (www.wwf.ca). That would certainly bring a smile to his face.

There will not be a celebration of life. Mike hated a crowd and being the centre of attention.