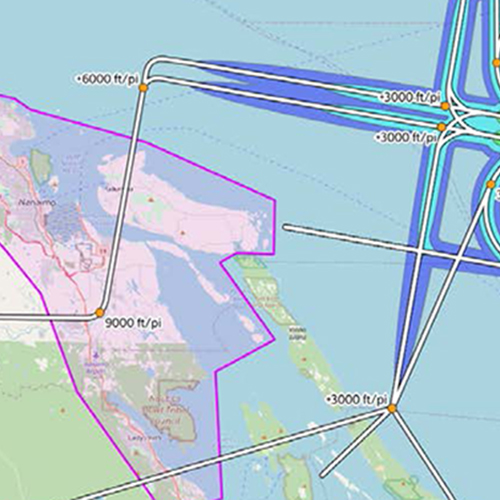 A change in air traffic patterns around the Lower Mainland is being proposed by Nav Canada, including a shift in how aircraft may fly over Gabriola Island.

According to the Vancouver Airspace Modernization Project (VAMP) outline provided by Nav Canada online, the federal government, with industry partners (including the Vancouver Airport Authority (VAA) are collaborating to modernize the airspace surrounding Vancouver International Airport (YVR). The proposed changes would result in new arrival routes that are purported to enhance safety while reducing overflight of residential communities where possible.

As part of the initiative, an additional type of arrival procedure—known as Required Navigation Performance Authorization Required (RNP AR)—is being introduced at YVR to leverage satellite-based positioning and modern aircraft flight management.

If implemented, some residents of the area may observe changes to air traffic patterns associated with select operations in the region.

As a result, Nav Canada is undertaking public consultation to ensure that communities can learn about the proposal and provide input on the proposed changes.

While the focus of the Project was mainly on designing and introducing new instrument approach procedures for Vancouver International Airport, some procedures will remain the same – such as departure procedures and procedures used by aircraft operating under Visual Flight Rules (VFR) (such as helicopters or floatplanes).

The proposed RNP AR procedures will allow aircraft to line up with the runway sooner than when using a typical procedure today. As a result, aircraft will fly a shorter distance and consume less fuel, and will also be operating on a Continuous Descent profile, which enables an aircraft to descend on a quieter reduced engine setting.

The RNP AR approach procedures will require some consequential changes to air traffic control procedures and the routes aircraft follow when they are arriving at YVR. Changes in routes at or near the airport also cause upstream changes to the routes when aircraft are still further away and at higher altitudes.

Nav Canada says that in preparing the data for the Projct, assembled detailed information on aircraft operations for arrivals to YVR. This included specific aircraft fleet mix information such as aircraft type, arrival and departure times, and routes of flight. Using this data, noise modeling was conducted to better understand the noise footprint associated with the proposed procedures.

Departures from YVR are excluded from noise modeling as there are no proposed changes to departure procedures.

When operating outside certain categories of controlled airspace, aircraft operating under Visual Flight Rules (VFR) are not always required to be in contact with air traffic control. Because these aircraft operate at the pilot’s discretion along non-defined highly variable routes, they have also been excluded from noise modeling.

The design of instrument approach procedures must meet stringent national and international standards to meet a high level of safety and all efforts were made to mitigate noise whenever it was safe and technically feasible.

Despite incorporating a number of noise mitigation measures into the proposal, it is important to note that entirely avoiding overflight of residentially populated areas is simply not possible and that some residents may observe aircraft operating more regularly in certain areas than they had before.

Most areas surrounding the airport will continue to observe many of the aircraft operations that they do today, whether they are associated with arrivals or departures.

The image shown above shows the noise “footprint” of a Boeing 737-800—a commonly used aircraft at YVR—conducting the arrival and approach procedure. Maximum sound level—expressed in decibels as dB(A)—is shown at various intensities using colours. Single-event noise level metrics represent the maximum noise level at a receptor location, considering a particular set of aircraft operations.

Public consultation on the changes will continue until February 3. A session specific to the Nanaimo area is being held online on January 24.

To be taken to the project web site to book a space for that session, visit www.navcanada.ca/en/air-traffic/airspace-reviews/vancouver-airspace-modernization.aspx 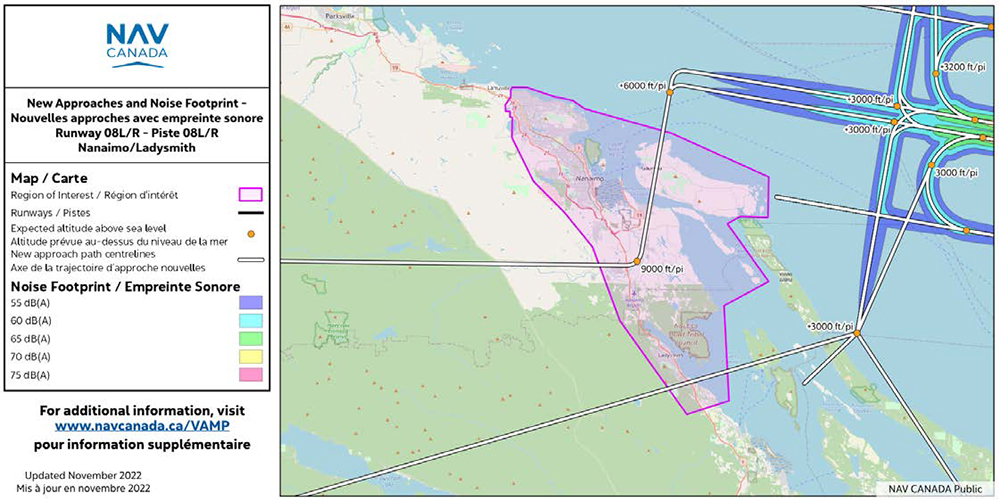 A Nav Canada image showing the noise “footprint” of a Boeing 737-800—a commonly used aircraft at YVR—conducting the arrival and approach procedure. Maximum sound level – expressed in decibels as dB(A) – is shown at various intensities using colours. Single-event noise level metrics represent the maximum noise level at a receptor location, considering a particular set of aircraft operations. Most of the areas shown fall below the 55 dB(A) noise threshold (similar volume to a normal conversation) for noise modeling due to the higher altitudes of aircraft in these areas as they approach YVR. NAV CANADA graphic