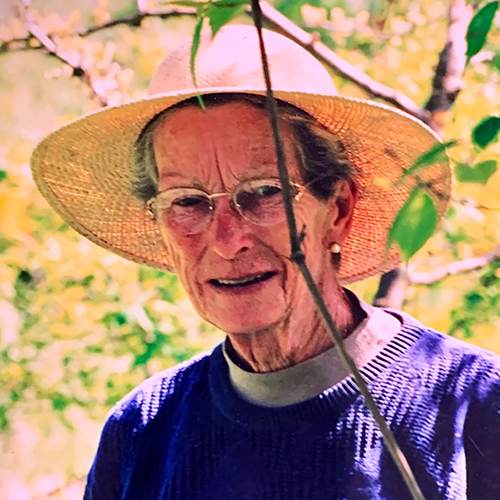 Patricia Ann DeMuth, formerly Watts, was born June 1, 1929. The eldest of 3 daughters of Monty and Faith Watts, in Essex, Great Britain.  She moved to Montreal, Canada from Britain after WW2. After working for a while in Montreal, she drove across Canada and fell in love with Vancouver and the west coast.

She found a position as out patient coordinator at the GF Strong Rehabilitation Centre where she worked until she met and married David Fredrick William DeMuth in 1960.

They set up home in Surrey, BC, adopted twins Susan and Stephen and later gave birth to Paul. When the children were still young, the family moved to Metchosin outside Victoria in 1969. Pat opened and ran The Hatley Toy Box toy shop in 1978-1984. After visiting friends Anne and Bill Phillips on Gabriola Island in 1968 they bought a summer home at Berry Point. Pat loved island life, gardening, tennis, bridge, socializing, and her 3 children. She retired with David to Gabriola in 1994 where she built The Cottage Garden. She continued to live at her beloved Berry Point until her diminishing health led her into Nanaimo hospital in September 2021. Pat loved to talk to anyone about about their life and was never afraid to share her opinion. She was generous to those that she loved but also was a force to be reckoned with. Anyone who ever met her will long remember her. She passed away peacefully Sunday March 6, 2022. She is predeceased by David (2010), her sister Jane recently and is survived by her 3 children, Cpt. Susan Sharp, Stephen (Jennifer) and Paul, her grandchildren Christopher, Marina, Sarah, and her Sister Bridget.

She will be greatly missed.