Port Vancouver says Gabriola anchorages are not off the table 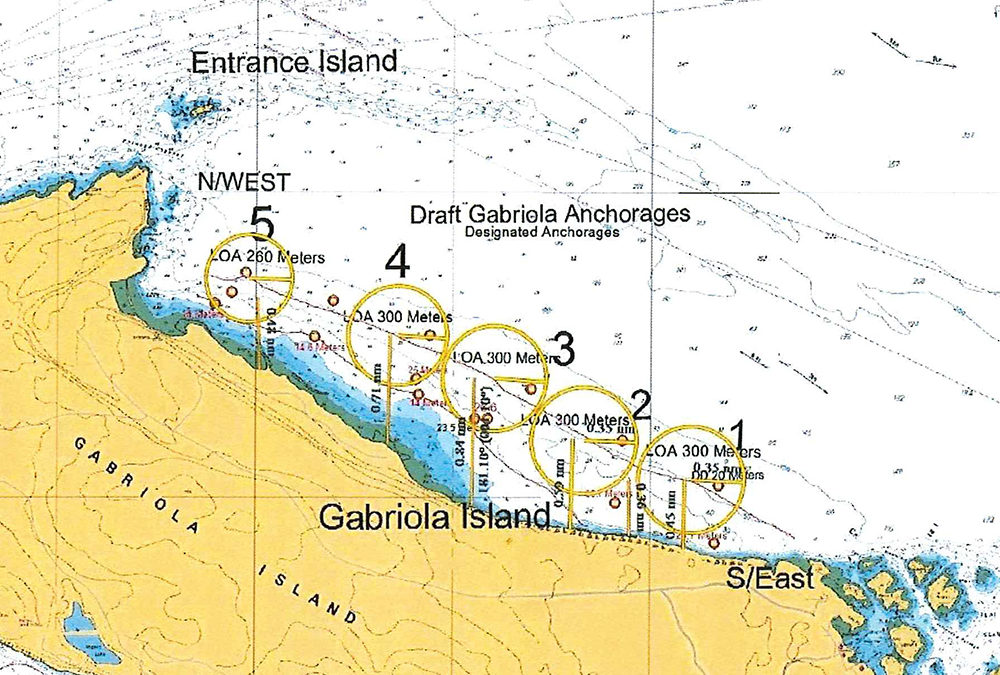 Captain Shri Madiwal with VFPA presented at the June Trust Council meeting on a public engagement process the Port is going to be conducting this summer and fall, as part of their long-term project to better optimize the Port.

Part of that work is also going to include ways to improve efficiencies within the Port, and their usage of anchorages throughout the southern gulf islands.

Madiwal is the Director for Marine Operations and Safety, as well as Harbour Master for the VFPA.

He said the vision of VFPA, “is to be the world’s most sustainable port.”

Madiwal said this means providing for a healthy environment; thriving communities; and economic prosperity through trade.”

In 2018, an interim protocol was put in place, allowing the VFPA to be the authority to assign anchorages to vessels in the Salish Sea, unless those anchorages were within the jurisdiction area of another Port Authority (such as Nanaimo).

The Interim Protocol, announced by Transport Canada was supposed to only be in place for six months while TC worked with industry and local communities for a longer term protocol.

Critics at the time said that since following the protocol was voluntary – not mandatory – it failed to get at the root causes behind issues like early arrivals, long wait times and supply-chain bottle necks.

“We are looking at increasing efficiency, and help better manage the effects of marine vessel traffic on local communities.”

Gabriola Trustee Scott Colbourne asked Madiwal, “the five proposed anchorages off north-east coast of Gabriola – are those still on the table?”

Colbourne pointed out Snuneymuxw First Nation has expressed opposition to the anchorages.

As well, there has been strong opposition from the Gabriola community – the group Gabriolans Against Freighter Anchorages (GAFA) which has grown to include other organizations around the gulf islands.

“Can you confirm those [anchorages] are no longer on the table in terms of their location?

“And are you taking steps to remove anchorages?”

Madiwal said, “at this point, we have no information whether that is on the table, that is for Transport Canada.”

As for the already-established anchorages in the gulf islands (such as those between Gabriola and Ruxton/Decourcy islands), Madiwal said, “all these anchorages are still part of the discussion and available to use.

“As for future steps on a moratorium – I would defer to Transport Canada, because at this point, we have no jurisdiction on those anchorages.”

“Generally, a vessel engaged on a voyage has a right to anchor in any navigable water in Canada unless it is expressly prevented from doing so in accordance with the Canada Shipping Act, 2001. Historically, anchorage sites have been selected by the vessel master, based on a number of considerations, including the quality of their anchor-holding ground, shelter from high winds, proximity to shipping routes and port logistics. Over time, anchorage sites have been mapped on marine charts rather than formalized through a regulatory process.

“The right to anchor a vessel is part of the common law right of navigation. A vessel is free to anchor temporarily and for a reasonable period of time in any appropriate location, unless specifically prohibited by statute or regulation.

“Port Authorities assign and manage anchorages within their boundaries. However, when a port’s anchorages and terminals are full, vessels must anchor elsewhere until space becomes available within the port.”

During the Trust Council meeting, Trustee Alex Allen from Hornby Island complimented Madiwal on the Port’s ECHO (Enhancing Cetacean Habitat and Observation) program, which it launched in 2014.

He said his only question is why the program is voluntary, and not mandatory.

Madiwal said currently, the Port is seeing an over 90 per cent participation from industry, and that there is funding available from Transport Canada for operators to meet the ECHO requirements.

Making the ECHO standards mandatory, he said, would be up to the Government of Canada, and would also require some jurisdiction with partners in the US, as the ECHO program includes areas within the US borders.

Trustee Paul Brent from Saturna said one of the issues islanders deal with around anchorages is that many of the ships coming into the gulf islands are there due to unplanned events – be that storms, fires at sea, or other vessel issues. Or the product they are coming to pick up is not yet available.

He asked if, amongst the work being dong for port optimization and efficiency, is there planning for capacity to deal with unplanned events.

“We are working on all fronts. Whether it is working with terminal partners, and working with railways to see what long term focus looks like.”

He added they are looking at what changes can be made for infrastructure, including looking beyond the federal lands to work with surrounding provincial and local governments as well.

Trustee David Critchley from Denman Island recognized that the Port runs, “a very large business crucial to the economy of Canada and source of many jobs. “But you don’t have an adequate parking lot for your business.

“I am wondering, do you have any plans, to create a larger parking lot for ships that are gong to be ewaiting to be loaded or unloaded? If you do have plans, how many spaces do you intend to supply, and when would they be available?”

Madiwal said the Port is maxxed out on anchorage spaces for diverse reasons, such as safety, depth, and critical habitat protection in the Roberts Bank area.

“At this point, Transport Canada needs to look at that issue, that falls into federal responsibility. From what I understand in my discussions, is we want to solve this issue and have a framework in place.

“And to work with industry.”

He said it could be easy to say that just because anchorage utilization is increasing, that increasing anchorages would be the easy solution.

“But we have to optimize that so that an anchorage is used for a few days, not a few weeks. We have to work with Transport Canada and communities to see if there is any appetite for increasing anchorages.”

He was asked why offloading of gypsum is allowed off Pender Island rather than having it offloaded in an onshore facility where environmental impacts can be better monitored?

Madiwal said, “it is up to Transport Canada to say what trade can be done. We had no input on that procees – we have limited ability to talk about it right now.”

Madiwal noted there is work being done to establish a Code of Conduct for freighters to work within while using the Port and associated anchorages. Input on this code is part of the engagement that is going to be happening this summer and fall, ending in September 2022.

“As we go into the code of conduct process, we will have a chance to say what kinds of activities can be permitted in these areas.

Trustee Sue Ellen Fast with Bowen Island noted the Metro Vancouver expressed support for the Port’s efforts to reduce and prohibit the discharge of scrubber and waste water while in Port jurisdiction.

She asked, “do you prohibit the discharge of scrubber/waste water in the southern gulf islands (SGI)? Is that in your jurisdiction? In the proposed code of conduct?”

Madiwal said, “this work has been ongoing for multiple years…eventually we will extend that to wider area. At this point, we don’t have ability to introduce restrictions in the SGI.

“Within the Code of Conduct, it will be highly recommended.”

Peter Luckham, Chair of the Islands Trust and trustee for Thetis Island asked if Madiwal could remark on things like ships doing maintenance (such as painting and cleaning) while at anchor in the SGI.

Madiwal said the Port has heard the complaints from the communities in the SGI about noise and maitenance being done.

“Noise and light continue to be an issue. Generating noise while activities are carried on while on board.

“It will be robust – the other pieces are about visibility – while the vessel is there, what is it doing, what activities are permitted, what are the next plans for the vessel.”

He said that Code will be public, and people will be able to know what activities are allowed within the Code.

In terms of alternatives to anchorages, he was asked if a buoy system could be used – where a ship hooks on to a permanent buoy, rather than dropping an anchor.

Madiwal said, “Being a captain on a tanker, I’ve done buoy moorings. Buoys are an option in deeper waters where you can’t anchor a ship. Installing a buoy is a better option. We had studies done to look at the impacts.”

He said in tighter waterways – such as the anchorages off Port Vancouver – buoys can be challenging. But did not say whether it was an option to be used in the Gulf Islands.

“Overall I think we’ll be working on the feasibility of the buoys and what are the benefits of installing them.”