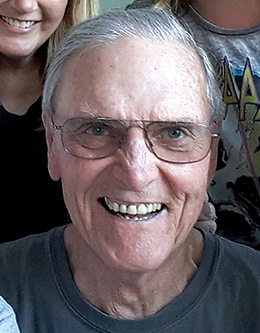 With a heavy heart, I announce the passing of my husband Russell Alan Pearce at home on August 17, 2021. Russ was diagnosed with pancreatic cancer in 2014. With the help of a very talented surgeon and modern medicine, he was able to beat it back for over seven years. When it returned, it came back with a vengeance – no hope.

Russ was born on July 9, 1937 in Winnipeg, MB, to Alan and Evelina Pearce, both deceased. Russ’s sisters Eileen and Vivian also predeceased him. His brother Norm lives in Regina, SK. Russ also leaves behind cousins, nieces, and nephews spread across the western provinces.

Russ’s career began by serving an apprenticeship with the IBEW. He began working for the CN. Eventually he made his way to Dauphin where he met me. I worked in the general office at the train station. Dauphin was the CN Hudson Bay Area headquarters at the time. In 1963 Russ relocated to Southern California. I followed shortly after. We were married there and ended up having a very good life there for 37 years. Our sons Douglas Alan and Jeffrey Gordon were born there. Boy Scouts, Sea Cadets, and Hobie Cat racing kept us busy for many years. Russ was heavily involved in the Electrical Construction Industry.

When we retired, Russ and I moved back to Canada in 2001, to Gabriola Island, which we love. A big thanks to all our friends and neighbors who have reached out with condolences and offers of support.

A celebration of Russ’ life will be held at a later date when we can get our family together.