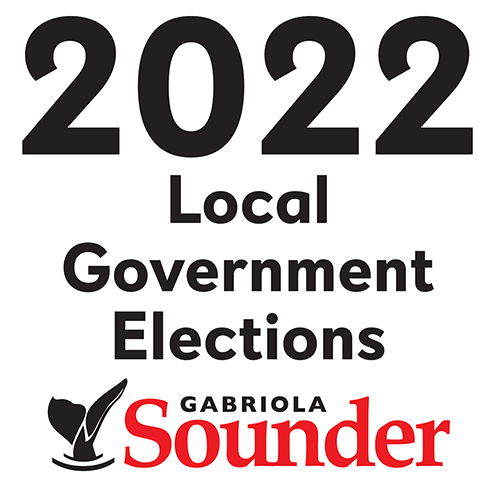 A meet and greet hosted on October 13th for School Board candidates and parents ended up with candidate Tanner Scott being escorted off the Gabriola Elementary School property by RCMP.

Candidates running for the Nanaimo-Ladysmith School District #68 had come over to Gabriola at the request of Gabriola PAC members, to talk with parents about issues and the election.

The meeting was held at the Gabriola Recreation Society offices, which are at the east end of the Gabriola Elementary School building.

During the meeting, a parent addressed the candidates saying that, “SOGI [Sexual Orientation and Gender Identity] is important to me, to the community here. I want to know whether, yes or no, you believe in that kind of education.”

While most of the Trustees said yes and kept their answers short, Scott stood up, pulled his cell phone out, and walked around the room, showing caregivers and candidates a photo of an erect penis which allegedly was from a gender-affirming bottom surgery. “This is my answer [to SOGI],” he said, “this is what happens.”

Parents, as well as other candidates, asked Scott to cease his actions, stating that displaying the image was inappropriate and had nothing to do with the question asked.

Scott continued speaking, saying if anyone wanted him gone, they would have to call the RCMP. District staff informed him that under the School Act, this was what was going to happen.

Cpl. Jordan Mullen, Detachment Commander with Gabriola RCMP said, “I can confirm that police were called to the Gabriola Elementary School at approximately 4:00pm on Thursday October 13th. A Gabriola RCMP officer responded to the school and escorted an individual off the property. As a result of police attendance, the individual left cooperatively and no formal arrests were made. No charges are being considered or laid at this time and as such, police will not be releasing the name of the person involved.”

“I was not able to attend this meeting. Based on the information I have received about Tanner Scott’s behaviour at the meeting, I am appalled that a candidate was unable to engage in a respectful political conversation.

“He answered a question in an inappropriate manner, and pushed so far past public decorum that it required an RCMP intervention before he would stop. To ensure a safe space for discussion and decision making, candidates must hold themselves, and be held, to higher levels of self-control, debate, and respect than what was displayed by Scott  Thank you to the RCMP for their assistance in this matter.”

Charlene McKay, an incumbent candidate for School Board Trustee, and outgoing Board Chair, provided a statement to the Sounder after the meeting saying, “as a candidate and a parent of students in School District 68, I am 100% in support of the vitally important SOGI curriculum in our schools.

“With regard to today’s incident, it is unfortunate that a candidate was unable to participate in respectful political discussions without invading the personal space of the attendees. This disrespectful behaviour created an unsafe environment for the attendees of the event and the candidate refused to leave the premises unless RCMP were called to escort him from the premises.”

Incumbent candidate Greg Keller also provided a statement saying, “I support the creation of safe, healthy, and inclusive learning environments that recognize and celebrate the diversity within our schools. The use of SOGI education can assist with this to ensure we are educating students and supporting them. SOGI helps to create understanding and acceptance and allows students to be who they are. By doing this we also create learning conditions that allow students to succeed.”

In a statement on his campaign web site, Scott says, “I was asked to simply answer yes or no (binary) to whether or not I support SOGI. I then provided the crowd with an image of a female mastectomy and phalloplasty surgery in order to complete her transition to transgender. The crowd seemed appalled at the site [sic], which was the point. The trustees present and the administrator all became incensed and I stood my ground. They called the police to have my voice removed; and still I speak. If you cut out a man’s tongue, it does not prove him a liar, it proves you fear what he has to say.”

Tania, “Mr Scott’s behaviour at Gabriola school was reprehensible. He used what should have been an opportunity to hear the concerns of a community that often feels marginalized within our district to spread misinformation about what is being taught in our schools, as he’s been doing through this campaign. The children of Nanaiimo-Ladysmith Public Schools deserve better. They deserve safe environments where they can truly be themselves. They deserve to hear that it is perfect ok to be LGBT and they are valued no matter their sexual orientation or their gender identity.”

SOGI (Sexual Orientation and Gender Identity) is a Province of BC Government initiative.

According to the SOGI web site, “throughout K-12 curriculum and school activities, students and teachers explore the topic of human rights and:

“What it means to value diversity and respect differences

“How to respond to discrimination

“Teachers may include discussions around the B.C. Human Rights Code, sexual orientation and gender identity.”

“SOGI 1 2 3” is an online resource (www.sogieducation.org) that supports educators in addressing these topics in the provincial curriculum.

The BC Government states that SOGI 1, 2, 3, “helps schools create safe, caring and inclusive learning environments for all students regardless of their race, culture, religion, sexual orientation or gender identity and expression. Educators are not required to use this resource.”