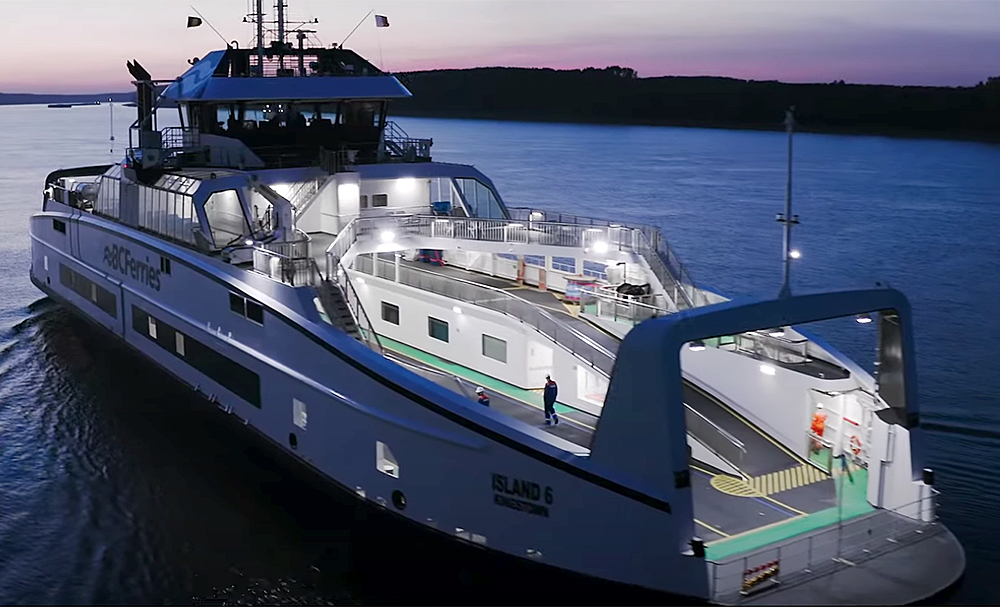 BC Ferries’ sixth Island Class ferry is now on its way to British Columbia after departing Damen Shipyards Galati in Romania at sunrise on October 11.

Island 6, as it is temporarily named, is the last in the series of newly built Island Class ferries to join BC Ferries’ fleet.

BC Ferries says the ship will take approximately 60 days, depending on weather to make the transoceanic voyage.

The ship will sail under its own power approximately 10,700 nautical miles across the Atlantic Ocean, through the Panama Canal and up the Pacific Coast of North America arriving at Point Hope Maritime in Victoria, B.C. later this year.

Like the three Island Class ferries that came before it, approximately one-third of Island 6’s journey is expected to be completed by using battery power with the main engines stopped; proof that the Island Class ferries will be able to operate as fully electric vessels once BC Ferries’ terminals have plug-in recharging capabilities.

The batteries will be charged during the voyage by a diesel generator.

The Island Class are battery hybrid electric ferries and are designed for future full electric operation. They are fitted with hybrid technology to bridge the gap until shore charging infrastructure can be installed.

Island Class ferries have the capacity to carry at least 47 vehicles and up to 400 passengers and crew, and allow for fleet redeployments and retirements of existing diesel-fuelled vessels.

The Quinsam, currently serving Gabriola, carries 63 cars and 400 passengers under its current operating license, and will be reassigned to the Crofton-Vesuvius Bay route when the Island Class ferries take over at Gabriola.

The proposed two-ship schedule for the Island Class will maintain the same early morning evening schedule as the Quinsam (single ship, with approx. 60 minutes between each sailing.) But starting at 7:35am, a ship will leave each end of the route, and the ships will run opposite each other so that there is a sailing leaving each terminal approximately every 30 minutes. Ideally, this will mean an additional 31 vehicles carried per hour from each terminal. 6:15pm is the final sailing time when both ships will be operating.

Video of the departure can be viewed at https://youtu.be/-gLn_3JchkE.

To follow Island 6’s journey and track its progress including course, position and speed, visit vesselfinder.com

Island 5, the other ship scheduled to serve the Gabriola route, arrived in Victoria BC on September 27, 2021.

BC Ferries will take ownership of Island 6 upon final inspection at Point Hope Maritime. The arrival of this new vessel will allow for the Nanaimo Harbour – Gabriola Island route to be serviced by two Island Class vessels starting in 2022.

BC Ferries says it looks forward to officially unveiling the name of the new vessels and welcoming the ships into service next year.

A draft sailing schedule for the two ship schedule for Gabriola was released earlier this year for public feedback. A finalized schedule is currently being discussed with the Gabriola Ferry Advisory Committee before being released to the public.